Warning: "continue" targeting switch is equivalent to "break". Did you mean to use "continue 2"? in /homepages/19/d666617375/htdocs/clickandbuilds/SpectreExpedition/wp-content/themes/uncode/partials/elements.php on line 877
 We’re moving – Spectre – Transantarctic Expedition

Yes it worked! 32kms in little over 2 hours on a late night session! It’s 1.30am and we are just bedding down after our fairly epic first session.

It was windy and poor visibility this morning and the forecast was not good, with no clear improvement until the 27th. In the afternoon the visibility improved and we started toying with the idea of moving. Even just 1km, just to see if the pulks would actually move, and to begin the journey. It took at least 2 hours to pack up the camp, leaving the tent until last.

The wind was blowing 18-20 knots and gusting up to 25knots, which is pretty gnarly. Both Mark and I started to have second thoughts, but Jean pointed out that the wind-blown snow makes it look worse than it is, and that as soon as we start to move with the wind it’ll be ok.

I was very nervous as we unfurled our smallest kite, the Ozone Hyperlink 9m and saddled up for the first time. So much stuff everywhere, so many complications. Boots, over boots, 194cm racing skis, tech touring bindings, down suit, gloves, gloves, more gloves, kite harness, helmet, goggles, buff, hoods, stills camera, GoPro rig, InReach tracker, food, radio, compass and GPS mounted on forearm for navigation – and that’s just on our person!  Not a simple set up at all. I’ve never flown that particular kite before, never pulled such a heavy load, never kited in such brutal cold. My word, there’s a lot going on! 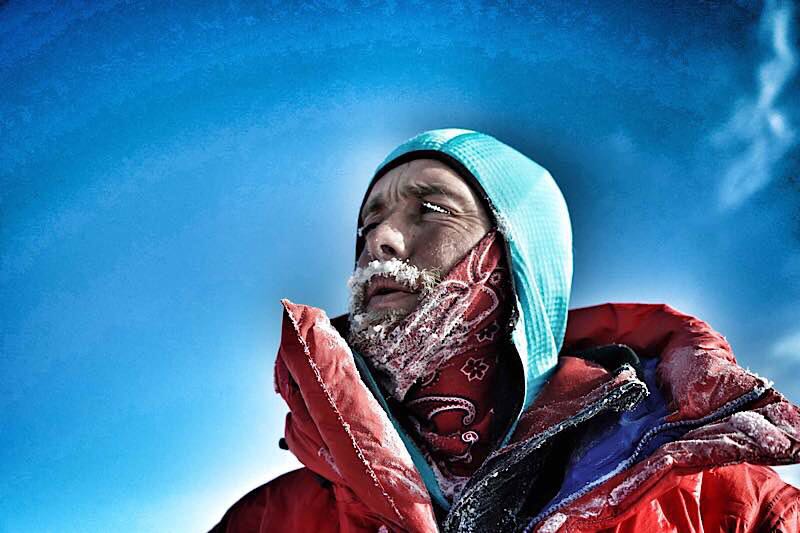 Around 7pm we popped up the kites into the strong wind with bated breath. I got lofted a couple of metres in the air before gaining control and pushing the kite sideways to the edge of the wind window. All of us launched successfully, and just like that, we were off at a flying pace across the rock hard, bumpy surface. The pulks that weigh about 180kgs each were barely noticeable and the wind direction was optimal for our heading.

It really couldn’t have been better and we quickly clocked up 25kms with little issue.

But then we had a few teething problems.  My radio didn’t seem to be sending, and the crackled transmission over the wind was barely audible. So I took the lead and navigated with some trouble as we were heading directly into the sun and the scratched face of my GPS was difficult see on my arm whilst maintaining the flight of the kite and charging across uneven terrain at 10-15kmph. Then gradually all of our goggles started to ice up until I could only see out of 1/4 of one eye.  So after 32kms we made camp.

Now that we’ve got the maiden flight out the way, we can begin to focus on all our other objectives. This is such a giant challenge in so many ways, but we are moving in the right direction. An awesome first session and a long way to go, but at least so far, our strategy seems viable.

PS I cracked the screen on my kindle last night. Doh! Thankfully I have one book on my iPhone – War & Peace!  Should keep me going!

Brilliant news. How you manage to handle such complex manoeuvres in that weather is awesome. War and Peace will keep you going Leo, Tolstoy was an astute observer of the human condition.

So it’s colder in Staveley than where you are lad…. Yea baby

So happy for you! We’ve had a big emotion imaginating you moving on Antarctic! Keep safe and enjoy

Couldn’t believe seeing ‘we are moving’ when I woke this morning as I’m usually up before you 3! How exciting

So excited to hear you’re underway! And that after all your planning, organising, worrying etc everything went so well. Amazing to think you could hardly feel the 180kgs – must have been a great feeling to fly across the ice like that with such a load on.

Hey Mark, mind if we use your hot tub?

Maybe Amazon could deliver you a new kindle Leo?

Good for the soul.