Warning: "continue" targeting switch is equivalent to "break". Did you mean to use "continue 2"? in /homepages/19/d666617375/htdocs/clickandbuilds/SpectreExpedition/wp-content/themes/uncode/partials/elements.php on line 877
 We made it!!! , just… – Spectre – Transantarctic Expedition 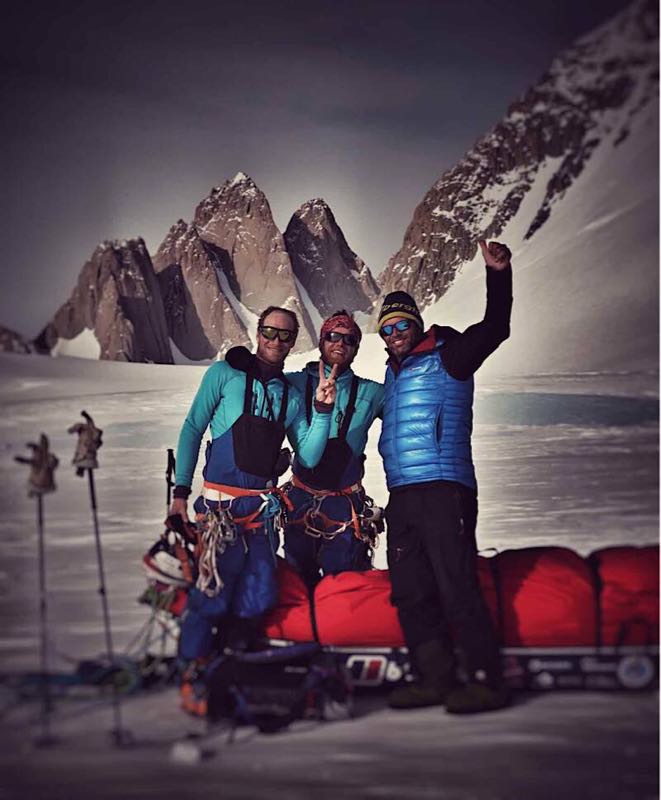 Relentless! Another full value day and we have completed the first leg of our journey. The spires of the Organ pipe peaks tower above us, the twin face of the Spectre centre stage. One face, inviting, sun -kissed and beautiful. The other, foreboding, hostile and chilling. The same aspect, different weather…

We started at 5am, beached in the ugly centre of the Scott Glacier. Surrounded by blue ice, pressure ridges and crevasses, it was not a very pleasant place to start the day. After some discussion about the previous evenings travel arrangements, we decided, on reflection, it would be prudent to adopt a more conservative approach. We roped up and walked with our skis dragging the pulks for 6 km hoping to find more amenable, safer terrain towards the edge of the glacier. It was blustery and cold and we kept having to fight to keep our fingers warm.

Pulling the pulks across ice was surprisingly easy, but over obstacles or across snow not so. The ice is extremely slippery and there were a few comedy moments as we took it turns to crater. Funny to watch, actually quite painful and we are all bruised!

Our gamble paid off and we eventually picked up much safer, cleaner terrain, and were able to launch the kites. The wind had dropped to a gentle breeze, full sun out, and for the first time since drop off it was pleasant out. For a moment it seemed like it would plain sailing for the final leg. It felt good to be underpowered, looping and spinning the kite to find maximum torque without worrying about the drastic consequences a twitch of the bar can make when overpowered.

But of course it couldn’t last. The wind dropped to zero and our kites fell out of the sky. The silence is deafening. Patience is the key at these times. You have to be ready with a well laid out kite to pounce on the slightest launchable breath. Once airborne, delicate but decisive movements generate apparent wind and you can keep the kite flying in almost zero wind. But jump the gun and attempt to launch with insufficient breeze and the kite is a mess, requiring a full restart; anchoring the bar, walking the lines, laying out the kite, while the others may or may not be airborne waiting for all three to be ready before departure.

This took an hour or so but we managed to, all three, pounce a breeze and get moving immediately to strike a horrendous sastrugi /crevasse field. Not a pleasant cocktail.
As we ventured out back towards the centre of the Scott Glacier to avoid it, we were pleased to find sheet white ice, not a kind surface but not a deadly one. With more wind we scratched along until finally we caught our first glimpse of the Spectre for a moment before disappearing behind Mount Harkeness in the foreground. Shady and big, and from far away first impression was intimidating.

But the Scott Glacier is ever changing and requires too much concentration to linger long on the spectacular scenery.

Once again misled by Antarctic scale it took several more hours of knee wrecking ice kiting before a final technical descent through pressure ridges and crevasses led to clear snowy run and the Spectre glacier.

Mark went ahead over a kilometre to get set up for the money shot of our glorious kite arrival to our sacred destination. Jean was a little ahead as we looped the again underpowered kites towards victory.

Then suddenly I was yanked backwards. I tried to loop the kite to resist but it was useless. I looked round and my Pulk had vanished and I was being dragged across the snow. Thankfully I stopped after about 10 metres and released the kite. I dug in a ski and wrapped myself around it; then, no doubt rather meek sounding, requested assistance from Jean on the radio. True to form Jean came gallantly to the Rescue. He secured the load and then together we spent 3 hours retrieving the pulk from the crevasse.

A fairly complex operation.  Not a big hole, like hundreds we’ve  crossed in last two days but this one decide to swallow my 150kg pulk, at the end of a massive day, just 1 km from our destination, but thankfully not me.

We limped down to Mark walking on skis, no kites, rather bedraggled. Not quite the glorious arrival I had planned!  But extremely fortunate in that nothing was lost or damaged and apart from a terrific shock I am unscathed.

We are camped in a magnificent spot! (It’s 2am)

The Spectre briefly showed us her pretty side, basking in sun, flirting almost, she is a prize beauty so tempting to be scaled! Such an immaculate massif, the rock looks outstanding and there are lines everywhere. As good for rock climbing as any granite spires I have seen anywhere. But then the cloud builds, the wind picks up, one remembers where one is and the thought of being up there, even further away than we are here is too much! I think we need a day or three to acquaint ourselves with our new surroundings before committing to anything too tall.

It is much warmer and less hostile than the beastly plateau down here. With kind weather, we have a chance. More harshness and we’ll be looking somewhere less steep!

Excellent News Lad’s ! Well Done ! May the Weather God’s be kind to you …

Can’t wait for the book, should be quite a read. Well done and good luck.

Aren’t those Lovecraft’s “At The Mountains of Madness”?. They look they are to me.

Well done boys. Great stories coming out although the disappearing pulk sounded scary. Looks beautiful most of the time but then we can’t feel the cold or the wind!

I once went down one of those holes myself, including pulk. Not a pleasant experience and one I hope to never repeat. Looking forward to hearing more from the climbing phase. Stay safe guys.

Talk about “the good, the bad and the ugly!” Great effort getting this first leg behind you

I didn’t expect I’d be so drawn in to your daily epics, but I must admit I’m hooked and I keep looking forward to the next page-turning instalment. We are all going through the highs and lows with you, but thankfully not the cold!
Keep it coming.

So proud of you guys! Thanks for all that news. Good luck for the next adventure…

Sounds epic!!! I’m nicely sitting in front of the fire with a cup of tea in my hand, looking forward to read the next chapter of your crazy cool adventure, sending you lots of warmth thoughts, kind winds, good night rest and heaps of energy for the days to come!!! Mountain of love to you 3 from les Hautes-Alpes🧘‍♀️🌲

You must be stoked to have overcome so many obstacles to reach the Spectre at last! I hope you are not too bruised and battered .Congatulations and best wishes for the next few days
Sue Webb