Warning: "continue" targeting switch is equivalent to "break". Did you mean to use "continue 2"? in /homepages/19/d666617375/htdocs/clickandbuilds/SpectreExpedition/wp-content/themes/uncode/partials/elements.php on line 877
 Phenomenal phenomenon – Spectre – Transantarctic Expedition 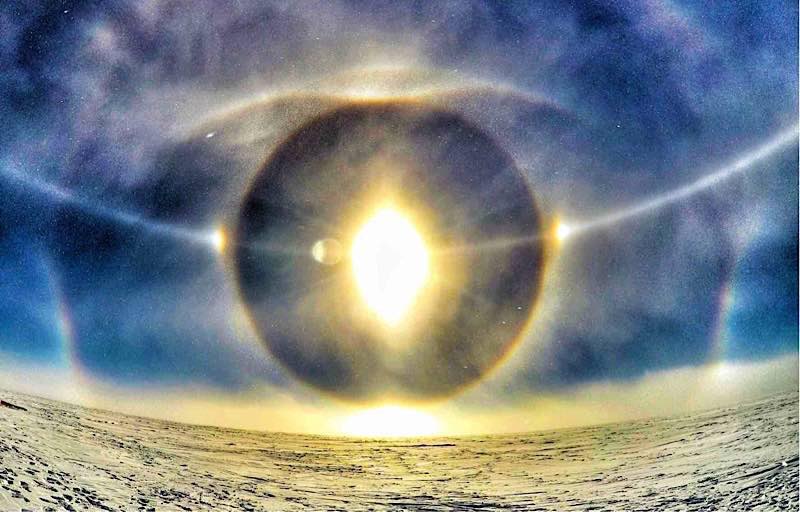 Today’s question folks – what is this phenomenal phenomenon?

We’ve seen few halos around the sun and a couple of sun-dogs but yesterday either somebody slipped something into our porridge or we were blessed to witness an utterly psychedelic, three dimensional display of polar sun refraction and reflection.

For about half an hour, we were over awed by what we were seeing. Photos don’t do it justice. It was amazing. 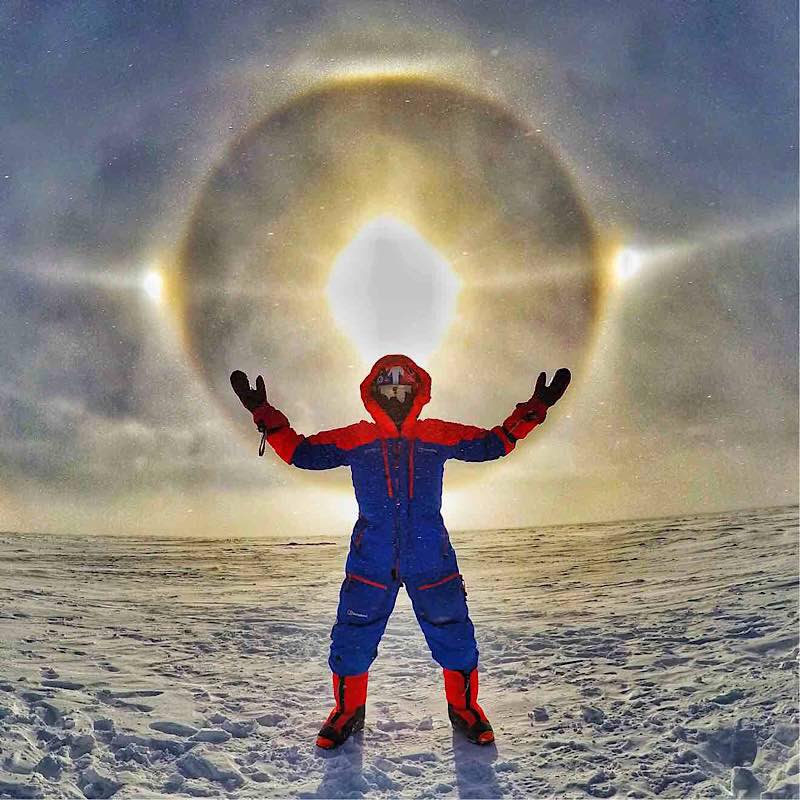 Yesterday we were fully geared up on standby to leave all day. The wind direction and strength wouldn’t allow us to go in the way we wanted. Twice we were fully packed and ready to go but within 100m it became clear it wasn’t happening, so twice we re-pitched the tent in exactly the same place.

Then the sky put on its mind blowing rainbow show and we let go of the frustration and wondered at this place we are visiting. 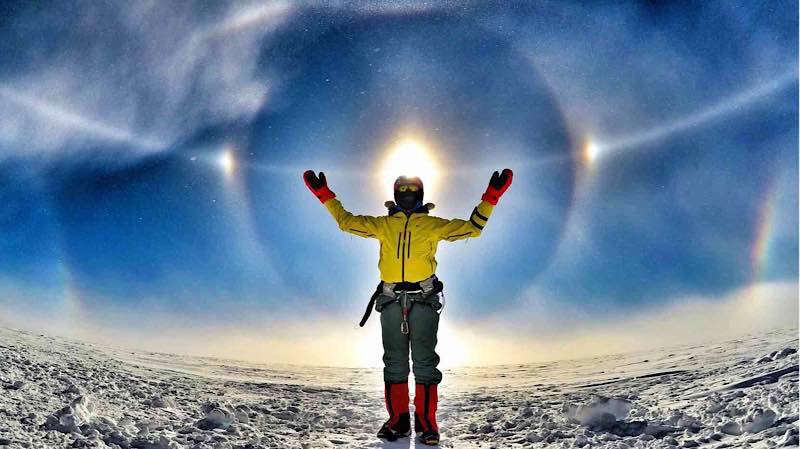 We had dinner, I got into bed and right away Jean excitedly mentioned “the wind has changed direction”. Sure enough it had swung around later than predicated and we had a solid 10-12 knot SE wind. We geared up and broke camp for the third time.

Setting off at 11pm it all lined up and we were flying! Fully powered, cross wind on a soft surface with clear, sunny weather. Our midnight run was as good as it gets, 101km in 6 hours. We called it at 5am. Then 7 hours later, we were off again, and managed 16km in 3 hours on the tail end of the SE. The good news is we are now officially half way in terms of kilometres. Although Mark seems quite perturbed by this. Hopefully the next 840km will be less taxing than the last?

Now I am exhausted. Good chance we’ll be here for few days waiting for SE unless Jean gets his way and then we’ll be aggressively up winding in deep snow with our massive loads. He has got kilometre killing in his mind and there is a mile massacre about to occur!

I believe perhaps what you experienced in the phenominal phenoninom is the result of following your bliss..
what you witnessed was your bliss!!

Oh my goodness how wonderful to see this with you all what a sight, my mum once saw a blue moon rise she was with some one else at the time but 80 years go they all laughed at her and she stopped talking about it, if she had only seen this she would have been able to believe what she saw that night. It looks like some thing out of Lord of the Rings the eye is incredible. I was happy to see you have covered some ks and the end is in sight. WIshing you flying again tomorrow.

Killing it every day!!! Props to you fellows.

Wow ! Incredible ! Another beautiful experience from this trek !

That is the most amazing shot, it will be very hard for anyone to top that as a self portrait on the wall.

Ab-Fab photos and brill distance you are doing great lads.
We also did a brill walk yesterday along the boardwalk at fuengirola. They are building a coastal path that goes completely around the coast on the costa del sol, each town is building it’s own boardwalk but they all will attach… Yea Baby

Once in a lifetime. Thank you for the fabulous pictures,

Not bad…not bad at all!!
Thanks for making me continue to dream….

Stunning!
Happy New Year to you all.
Safe travels:-)
Cavey