Warning: "continue" targeting switch is equivalent to "break". Did you mean to use "continue 2"? in /homepages/19/d666617375/htdocs/clickandbuilds/SpectreExpedition/wp-content/themes/uncode/partials/elements.php on line 877
 On the Ice ! – Spectre – Transantarctic Expedition 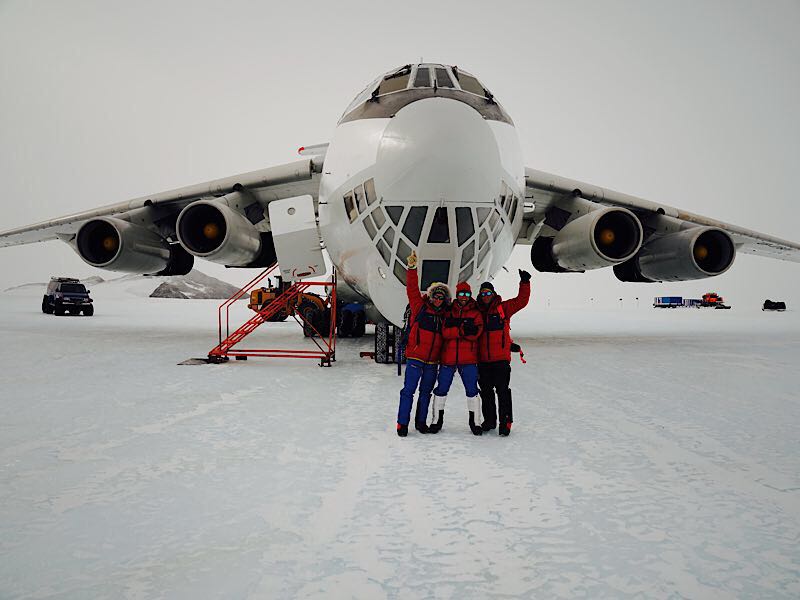 As I write this we’re in the belly of the big Ilyushin on the 4.5 hour flight south from Punta to ALEs Union Glacier logistics hub and camp in the Ellsworth Mountains, western Antarctica.  A Soviet era heavy cargo plane, it is an awesome machine. Capable of landing on an unprepared airstrip or blue ice runway carrying 17.5 tons of cargo and passengers and enough fuel to complete the 3500km return journey should it not be able to land. It can carry entire shipping containers, or tanks and has winches and cranes built in. Although there are no windows and the seats are cramped it oozes character. Makes you feel like you are in Sci-fi movie or a Cold War epic!

This is one of the first flights of the season when ALE are still building and supplying their operation and the plane is totally maxed out with 59 passengers and barely a kg of payload to spare. Somewhat bizarrely Pretty Woman is playing with subtitles on a large flat green TV?

Onboard are mostly ALE staff, a few guests on their way to visit the magnificent emperor penguin colony camp and several other serious expeditions. There a few teams on full South Pole treks including Robert Swan, who’s legendary 1986 South Pole expedition paved the way to the modern era of Antarctic travel and an interesting Austrian team of pro free-riders who want to explore some of the ski potential in the Ellsworth mountains also utilising kites.

Amongst the crowd are quite a few familiar faces, mentors, consultants and friends I have made along the journey to reach the Spectre. Carl Alvey, Ronny Finsas, Paul Landry to name a few.

Our unusual itinerary has been of interest to many of the staff and everybody is really behind us both logistically and in spirit. Which is nice.

It is common for this flight to be delayed, sometimes by weeks, but today we are on schedule. However we have suffered our first hiccup, late night kit modifications meant the repair kit was in use until the early hours. We overlooked removing the Leatherman tool and checking it in with everything else yesterday and to our dismay the security at the airport took it off us as they would anywhere else! A critical item; it’s something of a blow to lose it but thankfully we brought 2 others. I’m sure it won’t be the last bump in the road!

Jean is intently studying the digital copy of the instruction manual for the GPS installed on his phone. Jean has a background of big wall climbing and extreme alpinism and was a member of the elite French alpine climbing youth team. A serious ski injury shortly before he was about to qualify as a mountain guide took his life in a different direction. For 6 months over the summer he, his wife and two young boys live in and manage a mountain hut in the beautiful Vallousie valley in the Ecrins, Alps, France. In the winter he works as a rope access technician. On discovering snow-kiting it quickly became his first sporting passion and with a crew from his home region is at the vanguard of alpine snow-kiting, basically using kites to ascend alpine climbs! Technical terrain up to 45’ in angle surround by cliffs and rocks! I met him in Norway 2 years ago and after sharing a short mission on the Hardangervidda plateau quickly realised he would be the perfect partner for this expedition. It took him a while to decide if he wanted to come, weighing the responsibilities of family life, the need to earn a living and the desire for serious adventure with his customary thoughtful consideration. I was pleased when he accepted and he has been critical in the planning and strategy development.

He has a real talent for making, modifying and fixing outdoor kit and is our Mr fix it. He is also a very thoughtful and compassionate guy.

Although I am sure he must be excited about his boyhood dream of visiting Antarctica, I think the combination of 4 hours sleep, having our Leatherman confiscated and leaving child friendly communications behind for the next 10 weeks is pulling on his heart strings.

Mark is shooting away at the characterful Russian alphabet signs and chatting to the staff and guides. He has guided Mnt Vinson 5 times so is familiar with this journey, this crazy plane and something of what to expect from this great white desert.

He joined the team late in proceedings, just a few months ago when our original partner, Matt Pycroft, received the  news that his father was seriously ill and was forced to make the difficult decision to back out of the trip of a lifetime.

I happened to be with Mark at the adventure film festival he runs in Wanaka, New Zealand when Matt Pycroft broke the news. In a fortunate twist of fate when I explained to Mark the situation and difficulty I was likely to face finding, at short notice, a solid climber, snowkiter, with polar experience, camera skills, almost 3 months availability over Christmas and a desire to go on such a burly trip he responded in a typically kiwi, low key, badass way

Even more serendipitously he would actually be returning to Ushuia from a cruise ship based ski-mountaineering trip to the Antarctic peninsula on the exact date we planned to arrive in Punta. A day on the bus and he’d be with us. And so it came to pass.

Ten years older than Jean & I he is a well-seasoned mountain guide, with multiple seven summits, and lots of hardcore ski and climbing adventures under his belt. Married, he is a proper lifer, committed to fun adventures, action sports and mountain life both professionally and personally.

Although I have no doubt he is as nervous as Jean and I about our forthcoming mission. Not least of all the great length. 69 days is a bloody long time to be in the deep field. None of us have ever been out for that long.

We don’t know each other well and have never climbed together. Not an ideal situation but I wouldn’t have come this far with them if my gut feeling was not so positive. No doubt we will have our moments of stress but we are all cool and the vibe is good. 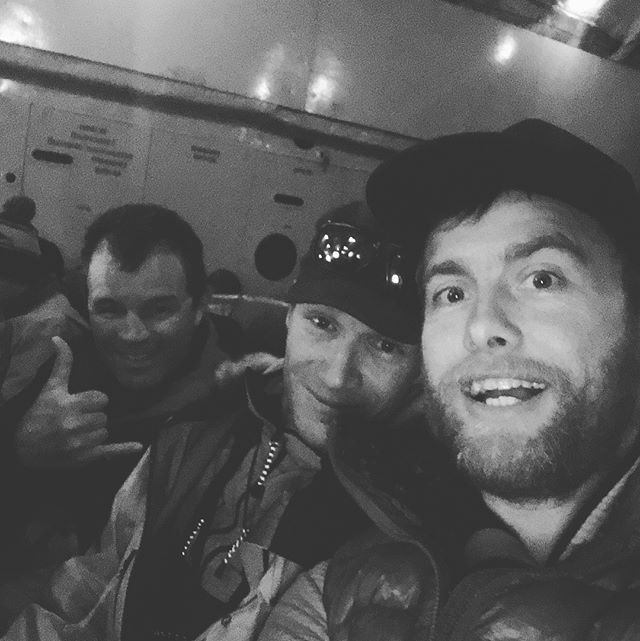 I am still wrestling countless fears, and concerns. How cold is it going to be when we get dropped off? Will there be any wind? Are we going to be able to fit everything in the pulks? Will we be able to move them? How are we going to film & photograph all this? Can we climb the Spectre? Can we complete this ludicrous mission? I wish my legs were stronger. I wish I was fatter. I wish I had more kiting experience. Why didn’t I plan a deep water soloing trip to Thailand?

But featuring in this sci-fi scene, accompanied by so many friendly faces and positive energy as we begin our descent to Union glacier and into an otherworldly adventure, excitement is beginning to creep in. Soon we will be putting our years of experience and lifetime of skills to the test. Soon we will be on our own and answers to all my questions will start to be revealed. In 10 weeks time we will be back on board this awesome aircraft and The Spectre Expedition will be but history and memories. I wonder what our tale will tell?

It’s gonna be so cool to follow you guys. Also say hello to Carl and Ronny. Best of luck

Good luck fellas, you guys got this!

Have a great trip guys. Small chance we may cross paths out there.