Warning: "continue" targeting switch is equivalent to "break". Did you mean to use "continue 2"? in /homepages/19/d666617375/htdocs/clickandbuilds/SpectreExpedition/wp-content/themes/uncode/partials/elements.php on line 877
 A Chance – Spectre – Transantarctic Expedition

A Chance – Organ Pipe A

Yesterday we woke to sun and no wind; exactly what we hoped for. This time we packed huge amounts of clothes and gloves in preparation for the worst.  We walked up to the col leading to North side together, before leaving Mark to explore alone. Jean and I set off up Tower A from the North aspect via the easiest looking line, with an attempt at the Spectre traverse in mind. 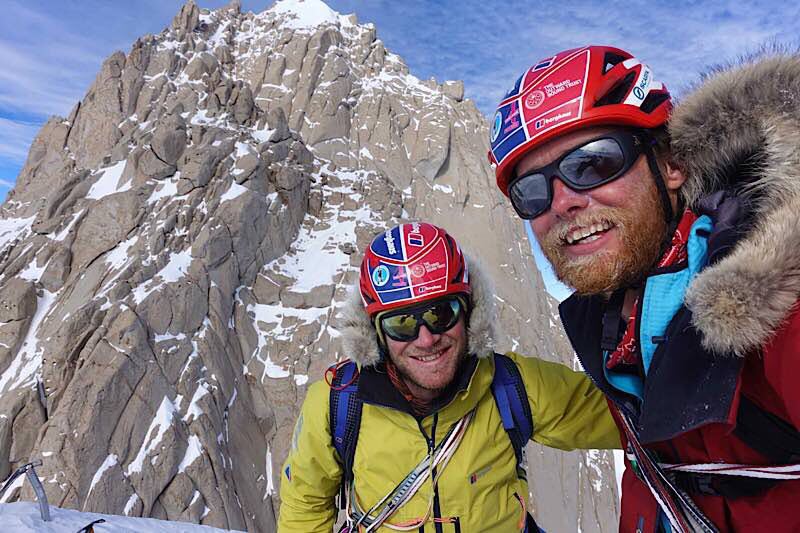 Once again immediately it became apparent, as the pilot said; nothing is easy out here! Here in the Gothic’s, everything’s bigger, further and much, much steeper than it appears.

The snow slope we thought we would walk up for 200m to start, quickly turned to blue ice. The tricky looking short, wide crack leading to the easier looking alpine terrain was in fact a horrific 15m off-width/squeeze chimney with blue ice in the back leading to serious and steep mixed climbing.

I set off up the wide crack with a cam 6, a big bro and an ice screw to keep my harness clean to avoid getting stuck. I was thankful of the ice, as whilst squirming and wrestling with the horrible width feature, I was able to wedge myself and reach back to place an ice screw on to which I was happy to hang and then stand.

I made it through the awkward squeeze and into steep snow, finding a belay at the very limit of the rope.

Jean, a much more accomplished alpine climber than me, took over leading steep, narrow snow slopes interspersed with vertical steps of snow, ice and rock that were difficult to protect. Using ski touring ice axes and crampons to the maximum of their ability, until finally he dug through the summit cornice and emerged onto the summit. 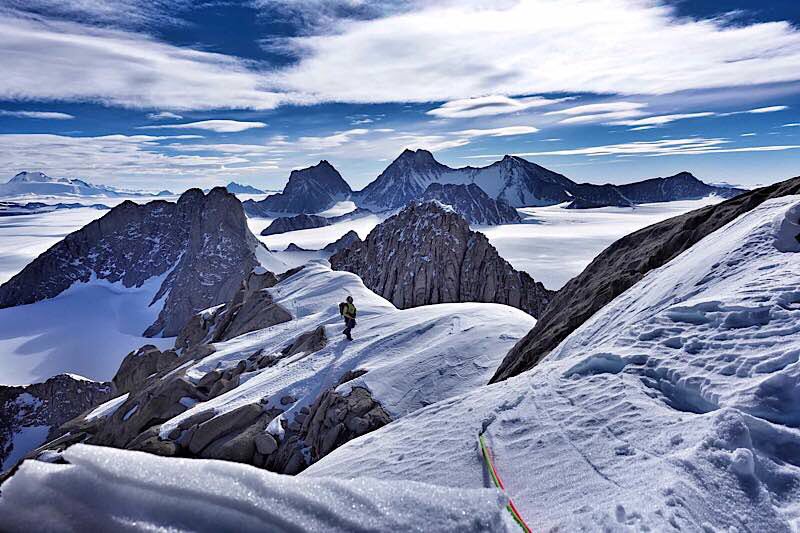 The granite is so compact and devoid of cracks, other than very large features, it was a struggle to find anchors from which to rappel off the top.  But the weather held firm and glorious. It was even possible to climb for short periods without gloves, and warm at the belays, albeit wearing lots of clothes.

It was far less stressful and more enjoyable than our ascent of the Spectre although the climbing was technically much more difficult and sustained.

After four long, committing rappels down a shockingly steep face, we reached the foot of tower A. The approach to tower B looked far more involved than expected. We checked the time- 10.30pm. We had already been climbing for almost 12 hours. The complete traverse would certainly become a 30+ hour ordeal. Just getting to the start of the climbing on Tower B would take at least two hours up steep blue with just four ice screws. Taking into account that everything thus far has been far harder, longer, steeper and slower than anticipated, although the weather was as good as we have experienced so far, with our long journey out commencing in just a couple days, the only wise choice was turn back to camp and in the direction of home.

So it seems the summit of Organ Pipe A is the turning point of our expedition. We begin our long journey back towards home. It’s a warm thought;  I miss my family terribly and am glad to be heading in their direction.  We came, we climbed and now we must refocus for the long march out.

PS 30 knot gusts late in the night after we got down. Would have been awful high on the Spectre traverse…

Glad you grabbed another route, well done. Now looking forward to reading about your return journey. Hope the weather gods are kind.

Congratulations guys! Another time, we’re so happy for you! Sun, warm temperature, no wind, Antarctic offered you a wonderful day for your last climb there, thanks for that! Hope there are other gifts for your coming back! Big hugs!

truly remarkable work on all parts and huge congratulations on a job well done!

Nice one guys. Now it’s what a 1000km ski prior to setting off home? Stay safe lads… Yea baby

After Mr. Trump finishes a second mandate, all that ice will have melted and you will be able to have a coffee and some yopo at the top of Spectre.
Another mission ticked on the list!. Now get your asses back.

Great decision making after a full and fabulous day. All credit to you.

The average person couldn’t survive out there for 5 minutes and you lads are out there climbing gnarly peaks! Bravo.

Brilliant Lad’s , Brilliant ! Keeping the finger’s and toe’s crossed for the Weather to stay all the way back ….. Stay Safe …